Please take a look at VALO’s safety instructions regarding pandemic.

Summer holiday 2022 – things to do in Helsinki

Helsinki is a maritime and very beautiful summer city, where you will also find a lot of nice things to do during your summer vacation. What to do in Helsinki in the summer? In this text you will find good tips for a successful holiday in the capital.

If you are thinking of doing something nice and relaxing in Helsinki, it is definitely worth spending some time exploring the Helsinki archipelago during your summer holiday.

There are a total of about 300 islands in the vicinity of Helsinki, some of which rise above the others. The islands worth mentioning and worth visiting are, for example, Vallisaari, known for its art; Seurasaari and Lauttasaari, which have established themselves as popular outdoor destinations; and Suomenlinna and Korkeasaari, which are two very famous sights.

Swim on the beaches of Helsinki

If you also have children in your family, swimming is definitely one of the most popular activities for a summer vacation. Surrounded by the sea, Helsinki has a total of dozens of official inland swimming pools, where warm summer days are spent actively.

The most famous of the beaches are, for example, the legendary Hietaniemi beach, i.e., Hietsu, and Munkkiniemi beach. In addition, you can find beautiful and long beaches in Mustikkamaa and Lauttasaari, for example.

You can visit Helsinki’s beaches and see the real-time algae situation on the water at Ulkoliikunta.fi.

Continuing with the theme of a family with children, it is practically impossible not to mention the legendary Linnanmäki amusement park, which offers both the youngest and also older members of the family nice things to do in the heart of Helsinki, even for the whole day.

Cycle all around Helsinki

Summer in Helsinki is perhaps best experienced either by walking or cycling around the city. If you do not find your own bike in the warehouse or you are just on holiday in Helsinki, city bikes can be used, which can be rented for your own use at a very affordable price. City bikes can also be rented through VALO Hotel & Work’s resp.

There are a total of 1,200 kilometers of cycle paths in Helsinki, so you can get practically anywhere within the city by bike. The bike is also usually the fastest way to get around when talking about less than five miles. Cycling at a leisurely pace is also the best way to explore Helsinki’s beautiful summer seascapes and parks.

Admire the scenery on a tram ride

Speaking of landscapes, a good way to get to know Helsinki’s city and park landscapes is to hop on a tram.

Helsinki is best seen on route number two. You can jump on the tram from Rautatientori, from where the tram starts its journey towards Kaivopuisto. During the trip, the tram flies past the stone-footed boutiques of the rugged Art Nouveau houses, for example, and this alone is a good reason why this tram connection is called a scenic route.

Along the way, the eye-catching passenger will also notice Huvilakatu, which has become known as Pihlajakatu for more than twenty years.

The views from the South Harbor are no worse either: the onion domes of the Uspenski Cathedral bathed in sunlight, the Ferris wheel of Katajanokka and the departing Swedish ship exude a summer atmosphere.

On the scenic route, it is good to note that the tram number changes from three to two in the West Harbor and from second to third at the Zoo stop. Even if the number changes in between, there is no need to change the tram itself during the journey.

Take a walk in the park or have a picnic

There are dozens of picturesque parks and green areas in Helsinki that invite you to summer picnics and park walks. Indeed, the parks are so popular places to spend the summer that many of them have become quite legendary.

In an article previously published on our website, you can read more about the many parks in Helsinki in more detail.

If Helsinki is not already a familiar place for you, you can also get acquainted with the history of different areas of the city and their peculiarities through various guided walking tours.

Walking tours in Helsinki are offered with a variety of themes, such as historical routes, art and cultural walks, nature walks, cemetery tours, various escape games, cruises and special tours with the same theme, including fun summer activities.

Go to summer festivals or a concert in Helsinki

What would Helsinki’s summer be like without festivals and concerts? The summer music season will start in May, for example in the form of the Emma Gala at the Helsinki Ice Rink. For example, the Maailma kylässä-festival, for example, will also be held during May.

The pace will accelerate in June, when many concerts by major performers will be held in Helsinki. The first actual festival will be held in the middle of the month, with a three-day Sideways 2022 festival.

Outside of the music festivals, the three-day Burger Lovers Festival, which takes place from June 15 to 18, is also worth mentioning. At Helsinki Railway Square,

After a quieter July, it will be August, the highlight of which will naturally be August 12–14, to be held at the Flow Festival 2022.

There are many urban fishing destinations in Helsinki where it is very easy to try your luck via public transport.

Lovers of river fishing can definitely recommend the legendary Vantaankoski, which is a very easily accessible fishing spot where you can also come across precious fish, such as sea trout or even salmon. The most common and perhaps most desirable catch in the watercourse is rainbow trout, which are planted in the river each year specifically for recreational fishing.

A fisherman between the ages of 18 and 64 must also pay an annual fish management fee.

Boat, SUP-board or Kayak at sea

In addition to swimming, it is possible to do sea activities in Helsinki in the form of boating, SUP boarding, and kayaking.

Raise up to the skies in the Sky Wheel

If you are only visiting Helsinki for a day trip and want to experience something particularly impressive in a short time, you can give a warm recommendation to the Sky Wheel, which is located in one of the most beautiful places in all of Helsinki, in Katajanokka, right next to the Market Square.

The Ferris wheel, which rises to a height of 40 meters, offers magnificent views over the city and the sea, as well as to the nearby archipelagos of Helsinki.

Many of Helsinki’s markets are nice places to hang out in the summer, with plenty to do for hours at a time.

For example, the most legendary of Helsinki’s markets, Kauppatori, will be renovated next summer, and, for example, two completely new living areas will be created in the area. The market also hosts market dance events every Thursday throughout the summer. The first market dances will be held next summer on Helsinki Day, June 12.

Visit a museum or flea market

What to do in Helsinki if the rain surprises you? Of course, summer rain can be a refreshing or even a nice experience, but usually when it comes to rain, it’s a good idea to stay indoors.

When it comes to the interior and comfortable things to do, you can head to a museum or a flea market, both of which are nice to wander around and wait for, for example, the weather to improve. Of course, touring the museums and flea markets is fun to do even in good weather.

Of the museums, Kiasma, the National Museum of Finland, and the Helsinki Art Museum are worth mentioning.

Of the Helsinki flea markets, at least the Uffis, Emmaus, and Fida deserve mention, which are well scattered in the heart of Helsinki.

Summer holiday in a hotel in Helsinki 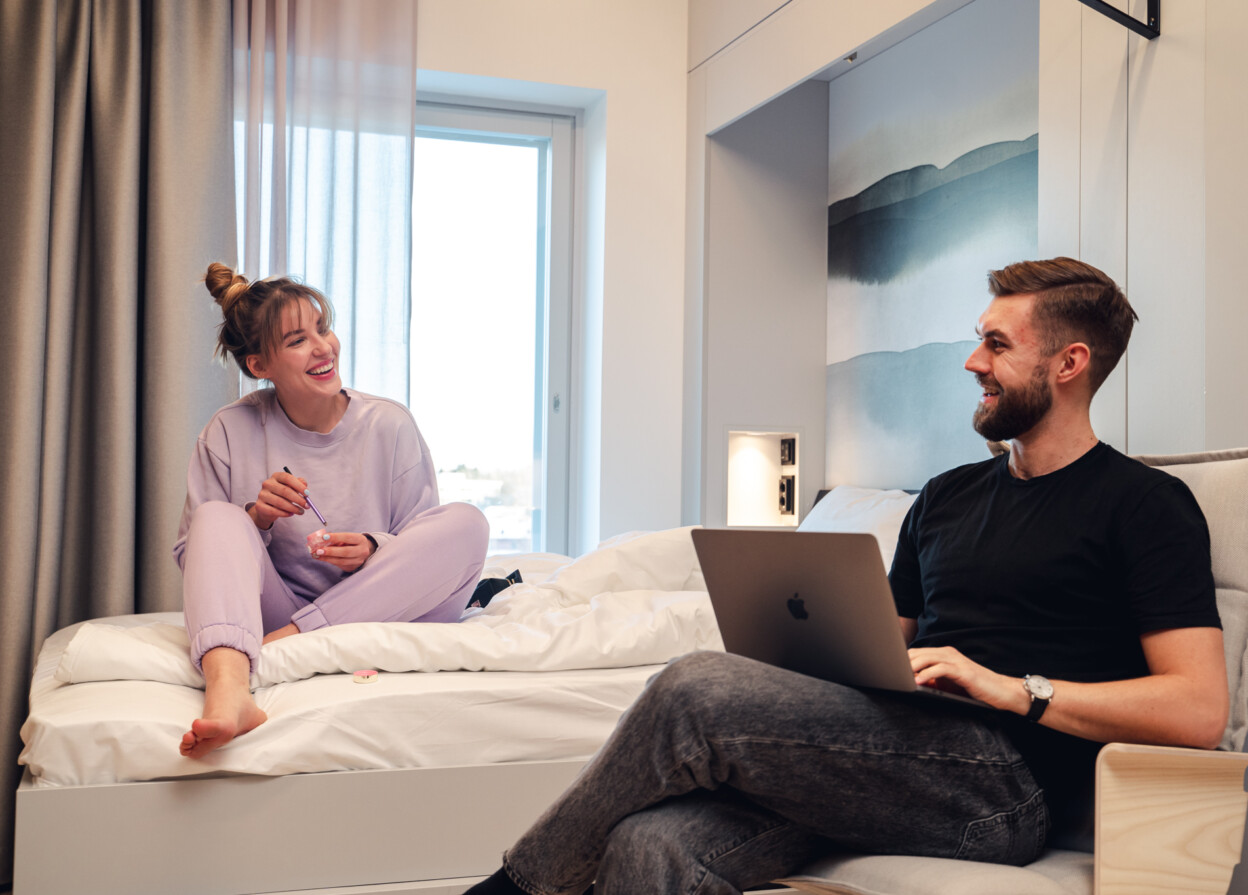 From VALO Hotel & Work in Ruskeasuo, Helsinki, you can easily reach practically all the sights of Helsinki by public transport, your own car or, why not, by bicycle. Our hotel, located with good transport connections, is a good base for a summer holiday in Helsinki.

BOOK A HOTEL ROOM IN HELSINKI