Home > Helsinki > Sights > Linnanmäki is the most popular travel destination in Finland
23.9.2022

Linnanmäki (Swedish: Borgbacken and colloquially Lintsi) is an amusement park located in the Alppiharju district of Helsinki, which opened its doors to the public in 1950. It is definitely the most popular destination in summer in Helsinki and one of our most famous attractions. The history of Linnanmäki dates back to 1907, when children’s day events according to Swedish customs were organized for the first time in Finland. The children’s days included e.g. raffles, dances, and rental circuses. These events raised money for child protection work.

The amusement park itself began in the 1950s, when the so-called Vesilinnanmäki area was leased in the middle of the recreation area formed by the Alppipuisto and Lenininpuisto parks. This area was initially used by child protection organizations for three years, and it was decided to establish an amusement park there.

Vesilinnanmäki was the highest rock in Alppipuisto, which got its name from the two water tanks located on the hill, i.e., the castle. Linnanmäki, on the other hand, is an abbreviation of Vesilinnanmäki.

Both water tanks are still in their original places on top of the hill. However, neither of the towers no longer function as water reservoirs and have already been given new tasks. One of the towers forms the indoor roller coaster Linnunrata extra, and the other serves as a warehouse.

Linnanmäki was opened to the public for the first time in May 1950. The area of the amusement park was initially 5.37 hectares, but in 1956 the area was expanded to more than 7 hectares.

Linnamäki started its operations with a few of its own rides. In addition to this, the amusement park had amusement equipment rented from the Danish Svend Jarlström, which was later redeemed as the Foundation’s own. The same gentleman also built Linnanmäki’s most popular device, the wooden roller coaster, when the Danish architect of Copenhagen’s amusement park, Valdemar Lebeck, recommended it.

The ever-renewing Linnanmäki today has just under 50 different amusement park equipment. This number is the largest in the Nordic countries when the number of devices is compared to the annual number of visitors.

Linnanmäki’s equipment is renewed practically every year, but there are still favorites that are decades old. The oldest piece of equipment at the amusement park is the carousel, which was completed in 1896. The most popular ride t is the legendary wooden roller coaster, which was put into use in 1951. The second most popular ride was, for a long time, Vekkula, i.e., the funhouse, completed in 1961. However, Vekkula reached the end of its line of life and was dismantled after the 2017 amusement park season.

At Linnamäki you also have Finland’s tallest amusement park ride, the 75-meter-high Kingi, and the Taiga roller coaster, which is the longest, highest, and fastest in Finland; at its best, Taiga reaches a top speed of no less than 106 km/h.

Eight of the amusement park’s total of 43 devices can be used free of charge by the public. There is also free access to the amusement park area itself. Access to paid devices is done by purchasing a wristband.

In addition to traditional amusement park equipment, Linnanmäki offers many different ancillary services, such as arcades, usually coin-operated games, kiosks, restaurants, the Peacock theater and the only Sea Life center in the Nordics, known as Sea Life Helsinki.

For a long time, Linnanmäki’s rides were mainly known by their English names, but they were all changed to Finnish in 2004. The Institute of Finnish Language in Helsinki awarded this work the “Language Pearl of the Year” recognition.

The most popular rides

Next, we list a few of Linnanmäki’s most popular amusement park rides.

As already mentioned earlier in the text, Taiga is the real attraction of Linnanmäki and, at the same time, a world-class amusement park device, where the top speed rises to well over a hundred kilometers per hour at its best.

On board the Taiga, amusement park guests get to experience both the feeling of weightlessness and traveling upside down. The momentum doesn’t stop halfway along the track either, as Taiga is launched twice during one trip.

The amusement park device designed specifically for Lints has won several international awards during its existence. Due to its nature, the device is not suitable for people with reduced mobility.

Since it was opened in 1951, the Wooden Roller Coaster has kept its place as the most popular amusement park device in Linnanmäki until these days. The longest descent of the roller coaster is 48 meters long and lasts for approximately 3 seconds. The brake master in the last carriage is responsible for braking during the journey. During the year, Puinen Vuoristorata makes about 47 thousand round trips.

The Panorama, designed for enjoying the scenery, is suitable as a device for those who prefer a more relaxed pace. The device rises to a height of 53 meters and opens up great views of Helsinki’s sea and urban landscapes to the guests on board. Panorama has been available to amusement park guests since 1987.

The carousel is Linnamäki’s oldest device, as it was manufactured in Germany as early as 1896. The legendary amusement park device arrived at Linnanmäki during its first years, in 1954. The device is especially suitable for those who enjoy the nostalgic amusement park atmosphere. Traditional organ music is used as a nostalgic mood lifter.

An amusement park would hardly be anything without a traditional ferris wheel. Rinkeli takes passengers to admire the amusement park area and Helsinki from a bird’s eye view. Sometimes the ferris wheel stops at a height of up to 34 meters to rest at a unique vantage point. Rinkeli, which arrived in Finland from Italy, was opened to the public in 2006.

In normal years, approximately seven thousand visitors visit Linnamäki every day, for a total of over one million amusement park visitors each year. In August 2006, Linnanmäki reached a handsome milestone when the 50 millionth visitor in its history visited the amusement park.

Since 1956, Linnanmäki has been owned by the Children’s Foundation, whose turnover in 2014 was around 25 million euros. The foundation distributes money from its annual income to child protection. For example, the prize pool distributed in 2015 was no less than 4.1 million euros.

According to a survey conducted by the Finnish Tourism Promotion Center in 2007, Linnanmäki was the most popular tourist destination in all of Finland.

In September, for example, Linnanmäki is open until midnight on some Saturdays. Find out more detailed opening hours on Linnanmäki’s own website.

Linnanmäki offers amusement park guests free access to the park area, where there are also a total of eight free devices. However, in order to access all the devices, the guest must purchase a wristband for a fee, which can be redeemed on site at the ticket office or in Linnanmäki’s online store. 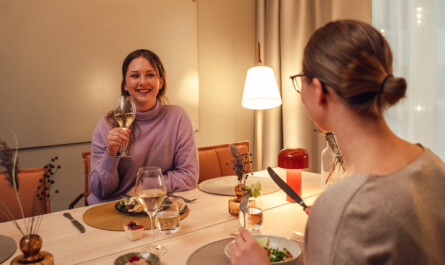 Staycation in Helsinki from 140€/night

Book a staycation at VALO that includes a delicious three-course dinner! Get into the soft sheets of the hotel, eat well, and unwind. Hotel nights can be reserved for the period 18.8.-30.11.2022. Prices start at 140€/night.