Music festivals and gigs in Helsinki in the summer of 2022

Summer 2022 will be taking us closer to the old normal in terms of organizing events. This can also be seen in the summer festivals, which are held all over Finland, considerably more than in the previous two summers. In this text, we present the summer 2022 festivals and music events in Helsinki. Jesus Christ Superstar is a musical phenomenon that has entertained audiences for decades, and which will arrive in Helsinki for two days this summer.

The favorite musical, written by Andrew Lloyd Webber and Tim Rice, is a timeless work with more than 40 years of history. The events of the musical, as the name implies, fall into a series of events related to Jesus Christ, which, however, is exceptionally seen through the eyes of Judas Iscariot.

The story, told entirely through the song, follows the relationships and struggles between Jesus, Judas, Mary Magdalene, Jesus ’disciples and followers, and the Roman Empire. The role of Jesus is played by Peter Jöback, one of Sweden’s most well-known musical stars, and Ola Salo, the frontman of The Ark, is seen in the role of Judas.

From July 1 to 3, 2022, Tuska returns to the program of the Helsinki Summer Festival after a three-year break. The festival, which brought together about 43,000 metal music lovers, has once again managed to attract a large group of domestic and international artists. Among the performers of the festival are worth mentioning, for example, Korn, Mercyful Fate, Devin Townsend, Deftones, Amorphis, Kreator, Carcass, Eluveitie, and Heilung.

Apulanta, a band that has been one of the most brightly shining stars in the Finnish rock music industry for more than 30 years, has been actively performing this spring and it would be almost impossible to find a better performer for the legendary Finnish Olympic Stadium in Helsinki in July.

Apulanta’s journey could be described as incredible and unique from the very beginning of the band. Founded in 1991, the band has achieved almost everything on the domestic level, with over the years releasing a total of 12 albums, 5 compilations, many live recordings and a number of successful singles.

As for Apulanta, it should be fair to say that everything the band has done has also turned to gold, as all of the band’s albums have sold enough to win significant awards.

Over the years, the band has toured many gig arenas all over Finland, and numerous books and even a film have been published about the band’s journey.

Since its inception, Apulanta has been a pioneer of its kind in all respects and has succeeded in conquering many Finnish people with its authenticity. The handsome concert at the Olympic Stadium will feature an explosive cavalcade of immortal classics and the band’s latest hits that have been born to this day.

The second actual music festivals in July will be held at the end of the month on the island of Lonna, where attendees will be able to enjoy high quality jazz music. This is the second time that the event will be held and it was extended to last for the whole weekend.

The first artists that have been published are jazz superstar Makaya McCraven from Chicago; Hailu Mergia, one of the living legends of Ethiopian music; and the Nigerian band Etran de L’Ar, which is performing in Finland for the first time.

The summer festivals will continue in Helsinki with the Summer Sound Festival, which is dedicated to lovers of electronic music. This music festival will be held at Kaapelitehdas on the same weekend as the Odysseus Festival.

The event will be held in the spirit of Central Europe and aimed primarily at young adults. The event will feature bright electronic music artists from both the international and domestic arenas.

Helsinki will be hosting a real worldclass music event in August when Toto, one of the world’s best-known bands, performs in Kaisaniemi Park as part of their Dogz of Oz tour.

Toto, that has sold more than 40 million albums during their career, will present their renewed line-up at his gig. This time, alongside founding guitarist Steve Lukather and the band’s lead singer Joseph Williams since the 1980s, the band’s bassist John Pierce (Huey Lewsis and The News), drummer Robert ‘Sput’ Searight (Ghost-Note/Snarky Puppy) and keyboardist Steve Maggiora (Robert Jon & The Wreck) will also be performing.

Founded in 1977 in California, the AOR sound super band is best known for, e.g., Hold the Line, Rosanna and Africa hits. Toto last performed in Finland in the summer of 2019, when they participated in the Pori Jazz festival.

In addition to Toto, the concert will also feature many other interesting artists and bands, including Brother Firetribe, Reckless Love, Jonne Aaron, and the Swedish H.E.A.T.

Pop star Justin Bieber will arrive in Helsinki’s Kaisaniemi Park as part of his Justice World Tour. During the tour, Bieber will tour a total of five continents from May 2022, traveling to more than 20 countries and performing more than 90 times. The tour ends in March 2023.

In addition to Bieber, Noah Cyrus, Mimi Webb, and Sebastian Noto will also be performing at the August gig.

The Justice World Tour is named after Justin’s latest album, Justice. Released in March 2021, the album was once again a huge success, with it being the most streamed album of the year in as many as 117 countries.

The gig, starring Justin Bieber, Noah Curys, Mimi Webb, and Sebastian Noto, will also be part of the Weekend Festival’s 10th anniversary. The festival itself will be held this summer in Hämeenlinna.

Perhaps the most anticipated festival of the summer is the 2022 Flow Festival, which will be held in Helsinki’s Suvilahti on August 12–14, 2022, after a three-year break.

The first performers of the festival have been unveiled by the first stars, including some international stars of the music world, the artists who have gained a nice lift for their career during the pandemic, and also some of the hottest names in the Finnish music industry:

The Flow Festival is a traditional city festival that has been held since 2004. The event originated from its founders’ own passion for music and Helsinki’s urban culture, and over the years, Flow has grown from an intimate club event to one of the most interesting music and art festivals in Europe.

Flow Festival’s program is always assembled with great precision and innovation to create a diverse entity that includes both popular culture and experimental art.

The wide selection of music and art, the diverse and trendy restaurant selection, the enchanting Suvilahti festival area, and the extensive responsibility program offer something for everyone who enjoys the festivals, and this is one of the reasons why many festival goers come to Flow every year.

As this is a music and art event lasting a total of three weeks, there are many different concerts about which you can find out more on Helsinki Festival’s own website.

Ed Sheeran’s “+-= x Tour” (pronounced “Mathematics Tour”), which started in Dublin, will arrive in Finland in the form of two gigs at the end of August.

During the two gigs, fans will have the opportunity to experience Ed Sheeran’s all-new concert production from a unique 360-stage set in the middle of the audience. The beloved artist’s previous “Divide” world tour (2017–2019) broke records for the largest ever audience and the largest box office tour in the world.

The concerts in Finland at Malmi Airport in July 2019 also attracted a record audience of 108,000 people, making it the largest single concert event in the history of our country. Ed Sheeran is the first foreign performer to date at the renovated Olympic Stadium.

Sheeran’s original was on Saturday, 20.8. The gig to be held was sold out practically in an instant, which is why it was decided to organize another gig for the visit to Finland on Sunday 21 August.

Viapori Jazz is celebrating its 20th anniversary earlier this summer due to the pandemic time. The long exception period has increased the demand and there is both the expected event and a handsome set of jazz music on offer.

You can find out more about the performers of Viapori Jazz on the event’s own website.

Book a hotel accomodation in Helsinki 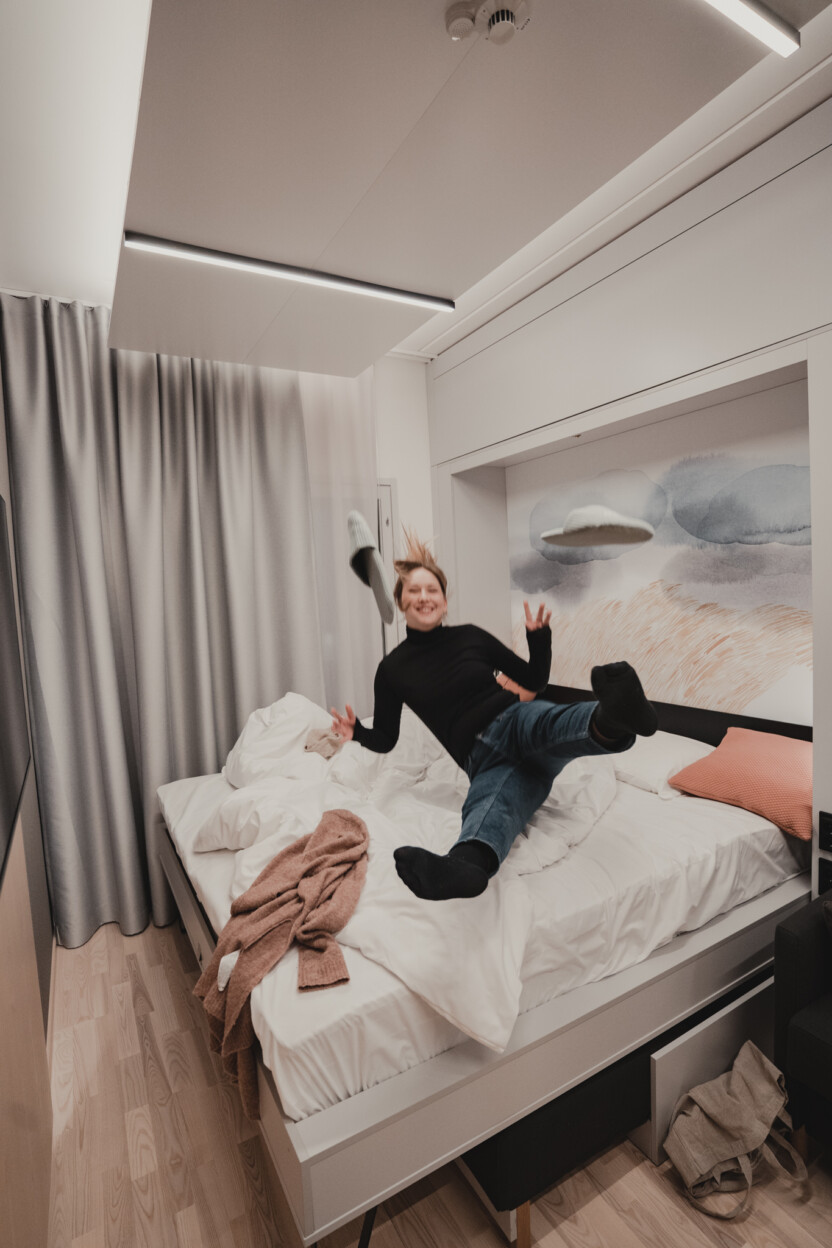 Are you planning to attend one or some of this summer’s festivals and gigs?

VALO Hotel & Work is located along good transport connections in Helsinki’s Ruskeasuo, and from us you can easily move between the gig and festival venues and the hotel with your own car, public transport, city bikes, and electric kickboards.

VALO also has a popular wellness area with saunas and pools, as well as a lovely rooftop terrace where a DJ plays summer music on weekends. On the roof of VALO, you can easily tune in to the atmosphere of a festival or a gig.